ISSN 1409-214X. Ambientico 253, Article 1 | 4-11 |
The quantification of both the deforestation process and the extension of the forest cover of Costa Rica have been the subject of discussion in the country since the 1980s. It was then that a first study was made, using remote sensors, whose results were published in an internationally indexed journal (Joyce & Sader, 1986). In that publication, the authors indicated that the national territory had less than 30% of forest cover, creating, from this moment on, a myth that involved two misperceptions: (1) that the rates of deforestation in the country were significantly high And (2) that the country had very small forest cover, based only on those areas considered to be protected under the national park or biological reserve modality.

The second important scientific contribution in terms of quantification of Costa Rican forest cover occurred in the following decade, that of the 1990s, when two seminal studies led to a paradigm shift in terms of covered area and deforestation. The first of these two studies constituted the first inventory of the country’s forest cover following standards developed by Skole et al. (1993) and indicated that such coverage in 1991 was 29% of the territory – without considering the Guanacaste region in dry and semi-deciduous forests and without considering a cloud cover of 17% – (SánchezAzofeifa, 1996; Sánchez -Azofeifa et al., 2001). And the second study, carried out by the University of Costa Rica, the Tropical Science Center and the National Forest Financing Fund (FONAFIFO), indicated that in 1997 the country had forest cover over 40% (UCR, CCT & Fonafifo, 1998).

The results of this second study were strongly refuted by various environmental organizations, because they contradicted the discourse they wielded nationally and internationally. But time has indicated that such results were correct, And are already part of the discourse of civil society and government, both inside and outside Costa Rica.

In the context of the above-mentioned background, this paper presents and discusses a vision of changes in the extent of the country’s forest cover, leaving aside the issue of deforestation rates, which has been extensively discussed and published in recent Years (SánchezAzofeifa et al., 2007). This discussion and analysis is based on a standardized study of the country’s forest cover in the period 1960-2013, covering an important time in the evolution of the policies of changes in land cover in Costa Rica (Sánchez-Azofeifa, 2000 ). This article concludes with a future vision on the part of the author about what could possibly happen with the current extension and also about the problems associated with the future mapping of our forest cover.

All the information generated in the aforementioned study was produced using methodologies widely described in internationally indexed journals (Sánchez-Azofeifa et al., 2001, Mora et al., 2005, Kalacska et al., 2005). Methodologies that allow the generation of standardized time series. Maps of forest cover for the years 1960, 1979, 1986, 1997, 2000, 2005, 2010 and 2013 were created for the following classes: forests with crown cover greater than 80%, not forest, urban areas, deforestation, secondary growth, mangroves, Clouds and water. The map of 1960 was elaborated from the interpretation of aerial photographs provided by the National Geographic Institute and that are part of the national cartography generated between 1950 and 1965. The map of 1979 was elaborated from the use of images of the Multispectral Landsat Scanner (MSS). The 1987, 1997, 2000 and 2005 maps were generated using Landsat Thematic Mapper (TM4, TM5 and TM7). The 2010 map was generated using multi-spectral images from the French SPOT satellite (multi-spectral and 20 m resolution) and finally the 2013 map was generated from the use of Landsat 8 satellite images. With problems of “comb” were not used.

The final maps used have the following characteristics: the minimum mapping unit is 3 ha, all images were generated from images that are atmospherically calibrated for the national conditions of relative humidity and atmospheric aerosols at the time of their collection and, Finally, all images were georeferenced to the “mother” images created in 1997 for the UCR, CCT & Fonafifo (Landsat TM 1986) study using 1: 50,000 maps National. The use of about 1,500 control points allowed to generate a georectification between years of less than 1 pixel of Landsat Thematic Mapper (RMSE<25 m). This level of accuracy does not ensure that artifacts associated with commission errors (call forest to non-forest and non-forest to forest) are minimized. In general, each map generated, with the exception of those of 1960, 1979 and 1986, were independently verified in the field. General errors of the non-forest forest classification were between 5 and 10% (accuracy between 90 and 95%).

The interpretation of the forest cover of the dry and semi-deciduous forest of Guanacaste was made in a special way (Arroyo-Mora, 2005), taking into account phenological aspects and the dynamics of changes in the leaf area, both in mature forest and in Secondary forest (Kalascka et al., 2007). This allows obtaining an accurate extension of a tropical forest, which is very difficult to map unless phenological aspects are taken into account (SánchezAzofeifa et al., 2009).

It is important to clarify that the maps generated by this work are not intended to support REDD + activities, since they did not exist at the time when the current methodology was created. The main objectives of these maps are: (1) to present a standardized and consistent mapping of the country’s forest cover that is reproducible every five years, (2) to map and to detect regional deforestation foci that can be monitored with greater spatial resolution, (3) to generate studies of the spatial distribution of the level of forest fragmentation in the country, and (4) to detect and quantify secondary forest recovery and growth processes at the national level .

Figure 2: Percentage of forest cover in Costa Rica between 1960 and 2013. Reference is made to 25% of national coverage in protected areas.

Our analysis of standardized data indicates two basic aspects: first, that changes in the country’s forest cover occur in two periods (figure 1) and, secondly, that total forest cover in the country has never been below 40% ( Figure 2).

The first of our results indicates the existence of two periods. The first period is associated with significant changes in forest cover and occurs between 1960 and 1986 (figure 1). This period can be defined as frontal deforestation, because the forest cover in the country goes from 59.5% to 40.8%. The total loss of forest in these 26 years was 956,675 ha, the deforestation rate being 36,800 ha / year (equivalent to 1.21% per year from the initial 1960 forest cover). The second period, which could be called forest recovery, begins in 1986 and ends in 2010. During this period, national coverage increased from 40.8% in 1986 to 51.4% in 2010. During this time the rate of deforestation Per annum has been below 0.25% per year, remaining stable.

As for our second result, it is important to emphasize that it contradicts the position of Joyce & Sader (1986), who created the world-wide myth of Costa Rica’s total deforestation. The study of these authors reflects the methodological limitations of the time in which it was carried out: digitization by hand and a pixel size of 750 m, among others. Therefore, research with updated methodologies and greater image processing capability should be expected to yield results that are closer to reality. In other words, Joyce & Sader’s estimates of deforestation and extension of forest cover in Costa Rica never corresponded to reality. However, it is important to highlight the pioneering effort of these researchers, an effort that is a seminal element for the work. 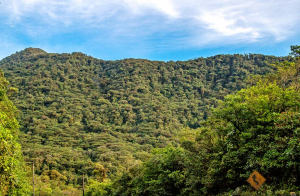 Our results confirm that the study by UCR, CCT & Fonafifo (1998), which at the time indicated a significant increase in national coverage forestry and also an insignificant rate of deforestation (<0.25% per year) compared to other places in the tropics, detected a trend that has remained in the last 20 years. In general, this important achievement is the result of many governments that have implemented conservation policies, but even more than that, it is the result of a change in the process of generating wealth in the country. In general, we could say that the recovery of forest cover occurs as a result of a collapse of the national productive system, which was controlled by factors such as the international price of meat and the presence of extensive livestock rather than intensive; In other words, the recovery was a consequence of less extraction of resources per unit of land use.

Certainly, the increase in the level of education in Costa Rica, the introduction of new sources of employment and resources, as well as changes in the sources of gross domestic product – more production of services and industrial goods with respective growth in exports (eg, Micro-chips) – have contributed significantly to the current coverage. Similarly, legislation such as Law 7575 and – to a lesser extent – the program of payment of environmental services have favored the increase in forest cover since the mid-1980s. It is therefore difficult to say that a specific government or a specific policy of the last four decades have contributed more to increasing the country’s forest cover; Rather, the process is the result of a combination of causes that, taken as a whole, have produced a forest cover of 51% at present.

Although the forest cover is significant and is already present in more than 50% of the national territory, it is necessary to distinguish different qualities within such coverage. Most of this is secondary forest with ages between 10 and 60 years; And most of the primary forest is in protected areas where the likelihood of land-use change is low. A lot of this coverage is largely affected by edge effects, which, as in Brazil, can impact up to 1 km within the forest (Skole et al., 1993). Similarly, the location of mature forest is simply an economic result, since it is found in areas with little or no agricultural vocation. In this sense, the theory presented by Adam et al. (2009) and by Pfaff et al. (2003), which indicates that national parks in the country were established in areas of low agricultural production, is clearly verified in this study.

The fact that Costa Rica has a forest cover of 51% is important in the sense that it shows the conservationist vocation of the Costa Rican. Although it could also be argued that such coverage is the result of changes in the macroeconomic forces of the country in combination with conservation policies in the last half century. Although the forest covered extension is considered an international success, it is clear that one thing is forest extension and another is its ecological quality. Our current coverage is highly fragmented, secondary in nature and there are important edge effects that are not mentioned when talking about it. It is important that the political and ecological discourses of the country begin to reflect this reality. In other words, greater efforts are needed to obtain a better estimate of forest cover not in extent but in quality.

In this sense, it is vital that current efforts carried out by national institutions aim at defining the ecological quality (biodiversity, water, carbon capture …) of the Costa Rican forests, and that approaches aimed at defining the extent of them move in A secondary plane. This charges more importance nationally because the government’s carbon-neutrality program for the year 2021 needs to consider the ability of forest sequestration of CO2 along different stages of secondary succession. Efforts in the Santa Rosa National Park in Guanacaste could be considered an example of the need for a paradigm shift at the national level.

The Inter-American Institute for Global Change (IAI) and its Collaborative Research Networks program (CRN3-025) for funding the research reported in this article. Also to the National Forest Financing Fund (Fonafifo), the Costa Rican Technological Institute, the National Science and Engineering Research Council of Canada – specifically its Discovery Grant.